The shops in Jaipur especially the ones around Amer, display some spectacular ceramic plates and vases. In dazzling shades of blue, green and yellow, these ceramics show romantic florals sprays, arabesques, cantering horses, elephants and camels. There are also occasional depiction of Persianate ladies playing the lute and the ideal Rajasthani belle promoted by Kishangarh kalam. These ceramics are known all over the country as the famed Jaipur Blue pottery. Being one of the few surviving pottery traditions, this unique art form derives its name from its surface which is hand painted in prominent shades of blue.

The blue pottery emerged with the setting up of Jaipur School of Art in 1866 under the patronage of Maharaja Sawai Ram Singh II. The task of developing the school was given to Dr. Alex Hunter, who modelled it based on his previous experimentations conducted in the Madras school of Art and their subsequent success. This involved a thorough initial geological survey to find locally available minerals to give the pottery its own flavour.[1] Although another local version relating to its origin, talks poetically, how Maharaja Sawai Ram Singh II was impressed by two brothers, Churamani and Kaluram, two local potters who had coated their kite string with blue and green dust of the their pottery and managed to cut off the imperial kite. They were honoured with posts in the Jaipur School of Art and later settled in Goonga Mehra ki Gali in Gangori Bazaar, creating blue pottery.[2] All though the art form was nearly dead in the second quarter of the century, it was revived with fresh directions after the independence of the country.

Unlike other pottery tradition in India, there is no use of clay in Jaipur blue pottery. The mixture contains ground quartz (100 kilograms), green glass (22-44 kilograms), fuller earth locally known as multani mitti (0.5 kilograms), borax (0.5 kilograms) and gum (1 kilogram), which is kneaded into a dough and moulded.[3] The pottery is partly moulded and partly wheel-turned, and then the parts are joined together. The surface is painted using various mineral pigments (metal oxides), which transforms into the desired colour after firing.  For example, the two most prominent colours, turquoise and ultramarine are obtained from copper oxide and cobalt oxide respectively. Apart from the shades of blue, the contemporary blue pottery products also introduce shades of yellow, green and red, which are also achieved by mineral oxides. On the final stage the pottery is finished with a glass glaze.

The initial repertoire from this pottery tradition comprised of phuldans (flower vases) surahis (flasks), mir-e farsh (carpet weights) and other spouted vessels. These can be seen exhibited in the museums, especially the Albert Hall Museum, Jaipur and few in the decorative art gallery of the National Museum, New Delhi. The product range today, however, have evolved into coasters, pen stands, vases, plates, idols, crockeries and so on. 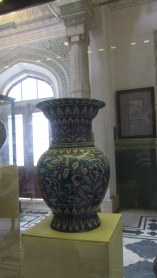