“On Mubarak-shamba (Thursday), the 27th, Nur Jahan Begam prepared a feast of victory for my son Shah Jahan, and conferred on him dresses of honour of great price, with a nadiri with embroidered flowers, adorned with rare pearls, a sarpech (turban ornament) decorated with rare gems, a turban with fringe of pearls, a waist belt studded with pearls, a sword with jeweled pardala (belt), a phul katara (dagger), a sada (?) of pearls, with two horses, one of which had a jeweled saddle, and a special elephant with two females…”[i]

“…The King at noon sat out at the durbar, where the Prince bought his elephants, about 600 richly trapped and furnished, and his followers, by estimation 10,000 horses, many in cloth of gould with heron top feathers in their turbans, all in gallantry; himself in a coat of cloth of silver, embroidered with great pearls shining in diamonds like a firmament. The King embraced him, kissed him and showed him much affection. At his departure he gave him a sword, the scabbard all of gold set with stones, valued at 100,000 rupees, a dagger at 40,000 rupees…”[ii]

Akbar always encouraged new innovations in arms and armours, and he himself looked carefully if they were applicable during actual combat. For example, Abu’l Fazl writes how he used to test the strength of the armours before finally introducing them to his army.[iii] Leaving aside the ones which were designed to be used in actual warfare, there are also an array of arms and armour which were solely for ceremonial purpose. With patronage from the rich and royalty, their exclusivity was reflected in the expensive materials used in the construction and surfaces studded with glittering gems.  Most of them were given away as gifts to important dignitaries and nobles along with robes of honour (khilaat) and were worn on special occasions. Various travelogues, personal memoirs and official records, mentions several times of jewelled daggers and archer’s rings (zihgir) being commissioned and also given away as gifts with rich robes of honour. The Baburnama[iv] mentions about many such robes of honour consisting of jewelled sabres and saddles, enamelled hilts to even Tipchāk horses, which were bestowed upon nobles of higher ranks. In the Rajput states, shields bejewelled with gems or lacquered surfaces were used by princesses to carry their trousseau and there are also spears inlaid with ivory pieces, used during state processions and durbars.­­­

The style and the structure of the arms were kept consistent according to the fashion of the times, although the artisans had much liberty to be creative in executing the surfaces and the hilts. The great continuing lapidary tradition reflected in the intricately carved jade, agate, crystal and ivory (elephant and walrus) hilts, depicting floral, birds and animal headed pommels. Workmanship in metal was also noteworthy, with enamelling, true damascening (zar-nishan and teh-nishan), false damascening (koftgari), bidri-ware, encrusting, etc. The blades were often inscribed with Qur’anic verses or the names of the patron in intricate toranj or cartouches, and the portion near the ricasso or the ricasso itself, being worked with animated shikargah (hunting) scenes or foliate patterns (eslimi).

With the fall of Damascus in 1400 CE, most of the finest blades were from Iran and India, who produced the famed watered blades. Indian blades contained a watermark which is called ‘jauhar’ work, which comes from an ancient practice and later became popular in Iran in the sixteenth centuries.[v] Wootz or Indian steel was famous all over the world for its quality and it was believed that the steel used for Damascus blades were brought from India.[vi] Egerton writes from the quotes of Colonel Yule that Marco Polo reported in his travelogue how it was so prestigious to have in one’s possession a sword or mirror made of Indian steel, as if it was a gem of some precious nature.[vii]

A workshop held in the National Museum, New Delhi, by traditional artisans from Rajasthan, demonstrated how skills and sense of aesthetics acquired from years of practice is used to shape these arms whose surfaces come alive with scenes and icons inspired from nature and time. 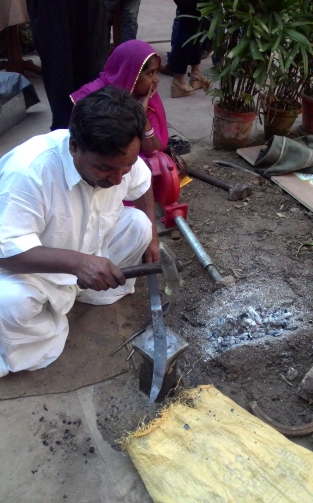 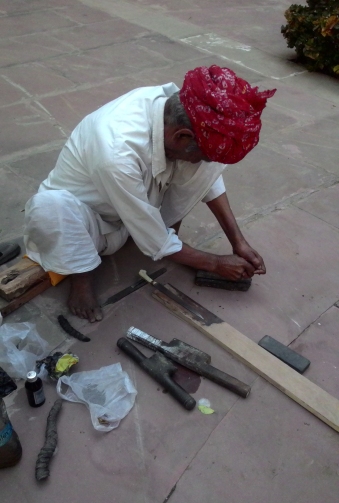 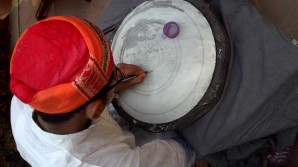 A day with Indian Arms…